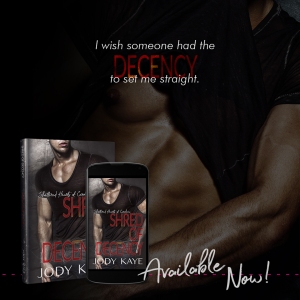 Owning up to your mistakes doesn’t mean you won’t make more…especially when the right woman is involved.

Hindsight is 20/20
A lot of people ensured Aidy’s future was filled with endless possibility.

She never saw the guy like me—who belonged behind bars—coming.

So, I’m going to make sure he pays… And in the meantime, do whatever it takes for Aidy to smile again.

There’s no doubt she makes my meaningless existence worthwhile.

If I had a shred of decency, I’d have left it alone.

Because if Aidy’s determined to stand alongside me, it will destroy her perfectly planned out life.
—Morgan

**This book contains sensitive scenarios that may trigger readers. Please consider reading reviews or contacting the author if you have questions.

Check Out This Excerpt!

I’m having a hard enough time understanding the tricks my mind is playing on me. Only a fool wouldn’t notice how attractive Morgan is. I get all the hot-guy notions in my head that have happened since I was old enough to realize boys didn’t have cooties. Anticipating him talking to me has my stomach in knots. Then he says something and I’m flustered. What’s happened to me comes back full force. I’m afraid of what he thinks of me already. Terrified of the change in his opinion if he knew. Realizing the confidence I used to have—or downright girlish stupidity that I had any shot with a guy like him—is gone.

Therefore, it doesn’t matter if Morgan gives me a second glance. He’s nice to me because he has to be. It’s an extension of the kindness he shows to Owen out of respect for Kimber and Trig.

Jody’s husband asked what she’d been doing all day. After five years she finally confessed, “When no one is around, I write.”
Okay, it was more like it was more like a bunch of stammering and trying to get out of saying a thing. Jody’s a writer. You want it pretty. Let’s compromise.
“Just finish one,” he said, challenging her to complete a story and share it. Little did he know that those words of encouragement meant they’d return from a family vacation with a wild and defiant set of quintuplets stumbling their way through life. Wasn’t raising their three sons enough?
A native of nowhere, Jody settled in New England for 17 years before agreeing to uproot her brood of boys and move to North Carolina. She spends most of her time reading, writing, and hoping that her ravenous children haven’t eaten all the ingredients before she cooks dinner.