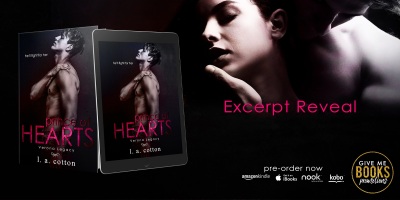 Title: Prince of Hearts
Series: Verona Legacy #1
Author: L.A. Cotton
Genre: New Adult Romance
Release Date: June 2, 2020
Blurb
Arianna Capizola is her father’s daughter.
Humble. Hardworking. Honest.
She’d rather spend her days helping at the local shelter
than brushing shoulders with her vain and entitled classmates.
Niccolò Marchetti is his father’s son.
Dark. Dangerous. Deceitful.
He’d rather spend his days getting bloody in the ring than
attending class and keeping up pretences.
When their paths cross at Montague University neither of
them are willing to drop the walls they’ve spent so long building. But he can’t
resist the girl with stars in her eyes, and she can’t forget the guy who saved
her that night.
There’s only one catch.
Nicco isn’t Arianne’s knight-in-shining armor, he’s the son
of her father’s greatest enemy.
He is the enemy.
And their families are at war.
**Prince of Hearts is the first book in Nicco and Ari’s
duet. Due to mature content that some readers may find distressing, this book
is recommended for readers 18+
ADD TO GOODREADS

Excerpt
“You look
good on my bike,” I said.
And that I
fucking meant.
“Thanks for
the ride.”
I tucked
the helmet into my chest and gave her a small nod. “You should go inside.” My
eyes flicked beyond her to the door.
“I think
I’ll have to go around front.”
“Your key
operates both doors.”
“Oh, okay.”
Lina rocked on her kitten heeled boots. I couldn’t resist letting my eyes sweep
down her body again. She was everything I could never have.
Everything
I’d never wanted.
Until
now.
I
swallowed, lifting my gaze to hers. “Go on.”
“Goodnight,
Nicco.” Lina smiled.
“Goodnight.”
She didn’t
move. Her eyes didn’t leave me even for a second. Slowly, she walked over to me
and slid her hand against my face. “Thank you, for coming to my rescue again.”
There was a playful lilt in her voice.
“Anytime,
Bambolina.” I smirked but it was wiped away when Lina leaned in, her lips
brushing my cheek. She hesitated just for a second, but it was enough for me to
turn my head and let my lips slide against hers.
Rookie.
Fucking. Mistake.
The moment
I tasted her, everything shifted. All I could think about now was pulling her
down on my bike and devouring her. She tasted too good. Too tempting.
She tasted
like my fucking downfall.
“Nicco.” My
name was a whisper against my lips as I ran my tongue against the seam of her
mouth. My hand slid into Lina’s hair, anchoring her to me as I kissed her
deeper, harder. Her body shuddered, a soft sigh getting lost between us. I
wanted to paint her skin with my lips, brand every inch of her. This wasn’t
even a real kiss. It was fleeting and cautious. But I already knew I wanted
more.
I wanted
everything this girl—this stranger—had to give.
“What are
you doing?” she whispered when I paused, my lips hovering over the corner of
her mouth. “Nicco, what are—”
I jerked
back as if I’d been struck by lightning. “You should go, Lina. I’ll wait until
you’re inside.”
“I see.”
Her lips thinned as she stepped back, putting a thousand miles between us, the
invisible tether between us almost snapping. “Well, I guess I’ll be going
then.” She didn’t hesitate this time. Lina walked away from me with her head
held high, without so much as a backward glance.
It was no
less than I deserved, but it hurt all the same.
I wanted
her.
I wanted
Lina the way I’d never wanted another girl before. But I couldn’t be that guy.
I couldn’t give her hearts and flowers and romance.
I couldn’t
be the prince she deserved, because my life wasn’t a fairytale.
It was the
stuff nightmares were made of. 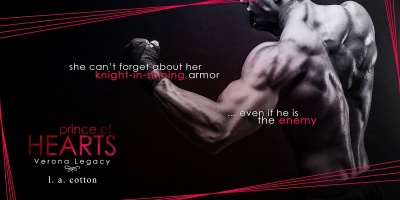 Author of over thirty mature young adult and new adult
novels, L A is happiest writing the kind of books she loves to read: addictive
stories full of teenage angst, tension, twists and turns.Home is a small town in the middle of England where she currently juggles being
a full-time writer with being a mother/referee to two little people. In her
spare time (and when she’s not camped out in front of the laptop) you’ll most
likely find L A immersed in a book, escaping the chaos that is life.
Author Links
WEBSITE