August 26, 2019August 26, 2019
I’ve only gotten to read Deal Makers so far in this series, but Laura Lee is sooo great! Make sure to check it out!
#SeriesBlitz #DealingWithLove #LauraLee #Awesomebooks 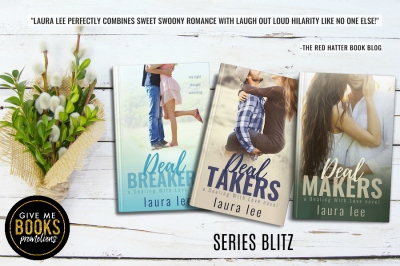 Author: Laura Lee
Genre: Romantic Comedy
Release Date: September 1, 2015
Blurb
“I’M A VIRGIN. AND YOU NEED TO RELIEVE ME OF THAT.”
What respectable guy
could say no to that? Yeah, she was my best friend. But she was also the
hottest chick I’ve ever known. I thought it would be simple. I thought we’d
have a good time, then pretend like it never happened.
It turns out, I was
an idiot.
Now, she wants
nothing to do with me, but I’m determined. I’ve spent the last five years
without her and I refuse to waste another day. I have a solid plan. All of my
figurative ducks are in a row. I’m going balls to the wall, and I’m not
stopping until I win back the only girl I’ve ever loved.
Too bad for me, Devyn
Summers was sitting on a secret that nothing could’ve prepared me for.
ADD TO GOODREADS 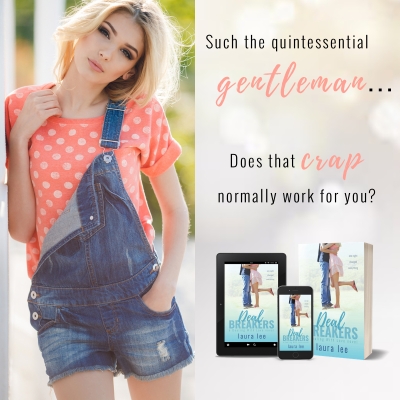 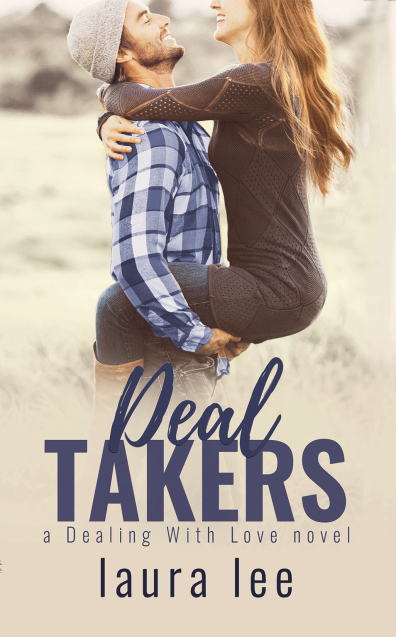 Title : Deal Takers
Series: Dealing with Love #2
Author: Laura Lee
Genre: Romantic Comedy
Release Date: July 16, 2018
Blurb
MY DICK CAN BE A REAL BASTARD SOMETIMES.
When he takes
charge, I’ve been known to do a lot of stupid shit, despite the fact that I
have a genius IQ. Case in point: How I met the woman of my dreams.
Now, I’m going to
let you in on a little secret: I don’t regret that moment of idiocy one bit. It
may have been one of the most embarrassing moments of my life, but you know
what they say about first impressions, right? Well, I can guarantee that I made
quite the impression that evening. (Don’t worry; I’ll tell you all the
gory details later.)
Most days, she acts
like she hates me—probably because I behave like an ass— but we both know the
truth: Rainey O’Neil wants me just as much as I want her—she just doesn’t want
to admit it.
Good thing I’ve
never been one to back down from a challenge.
ADD TO GOODREADS

Title: Deal Makers
Series: Dealing with Love #3
Author: Laura Lee
Genre: Romantic Comedy
Release Date: January 4, 2019
Blurb
I’VE OFFICIALLY SCREWED THE POOCH.
I mean, not literally, because that would be
disgusting. But I did break one of the cardinal rules of Bro Code, which is
equally appalling. You see, I fell in love with my best friend’s sister after
he explicitly forbid me to go near her. As if that weren’t bad enough, I went
ahead and married her while sh*tfaced in Vegas.
I know that I should get an annulment and
forget the whole thing ever happened, despite the fact that our wedding night
was the hottest thing I’ve ever experienced.
The last thing I should do is go back for
seconds.
Or thirds.
Or…you get the point.
And what I definitely shouldn’t do, is say
f*ck the consequences and give this marriage a real shot.
But here’s the problem with that: I’m pretty
sure that Charlotte Harris is the one. And if that’s the case, nothing
is going to keep me away from her. Not even her brother.
ADD TO GOODREADS 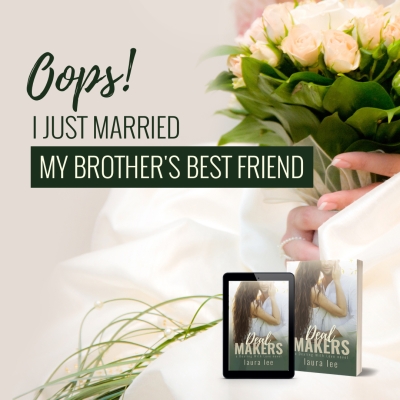 Author Bio
Laura’s
passion has always been storytelling. She spent most of her life with her nose
in a book thinking of alternate endings or continuations to the story. She won
her first writing contest at the ripe old age of nine, earning a trip to the
state capital to showcase her manuscript. Thankfully for her, those early works
will never see the light of day again!
Laura lives
in the Pacific Northwest with her wonderful husband, two beautiful children,
and three of the most poorly behaved cats in existence. She likes her fruit
smoothies filled with rum, her cupboards stocked with Cadbury’s chocolate, and
her music turned up loud. When she’s not writing or watching HGTV, she’s
reading anything she can get her hands on. She’s a sucker for spicy romances,
especially those involving vampires, bad boys, or cowboys!
Author Links
WEBSITE