The next book in Layla Hagen’s Connor Family series, ONLY WITH YOU, is available today! Be sure to pick up your copy now and fall in love with Val and Carter!

About ONLY WITH YOU

Carter Sloane is famous for one thing: winning cases. He’s sharp, astute, and always gets his way. In his private life, he’s constantly fumbling his way around when it comes to raising his two nieces.

When he moves into a new office, he just can’t take his eyes off the fiercely independent woman across the street. He’d love to touch and kiss that irresistible body.

Valentina “Val” Connor is proud of her booming fragrance company. If only she were half as successful in her love life… Between trusting the wrong men and sheer bad luck, Val is convinced she’ll never find the one.

However, the sexy lawyer in the neighborhood with his sophisticated charm and sex-appeal is hell bent on proving to her that she’s wrong. Val’s senses warn her to stay away from men like him-even if her body is begging her to cave.

But when she finds out about Carter’s nieces, she steps in to help, doting on them with love and care. She can’t believe that the same man who is usually in control is completely in over his head with the girls.

But as Val and Carter grow closer, one thing is clear to him: He’d move mountains to make her happy, but with Val’s career soaring, how can he ask her to commit to the chaos of his life?

Get your hands on ONLY WITH YOU now:

Add ONLY WITH YOU to Goodreads!

“Figures,” she mumbled, more to herself.

“That you like to work out.” She pointed at my chest, then promptly dropped her hand, as if just realizing what she’d done.

“I’m trying to decide if my honesty will go to your head.”

I laughed, and Val playfully slapped my shoulder.

“Well, you probably own a mirror, and you see what I see, so there’s no reason for me to be dishonest.”

Despite knowing it wasn’t the smartest thing, I leaned closer.

“I want to hear you say it, Valentina.”

She narrowed her eyes, as if weighing the pros and cons.

“No, I don’t think I will. Too much self-confidence is as bad as no confidence. It’s what my dad used to say. He was Irish and tried to pass all sorts of weird sayings as old Irish proverbs, but my friend Google disagrees. I think Dad just made them up. But I like them.”

She relaxed—until I moved even closer. “Don’t think I’m letting you off the hook about the other thing.”

Val licked her lips, then shrugged one shoulder playfully. “Suit yourself. I can’t be pressured.”

I wiggled my eyebrows. “No, but I bet you can be… persuaded.”

“Mmmm… I don’t think so, Mr. Sloane. You lack the proper persuasion tools.”

That was a sweet challenge.

“Think I’m gonna make it easy for you?”

Val spoke the next words with utmost seriousness. “Well, bribery works better than persuasion, if I’m honest. If my sisters are to be believed, I can be talked into crazy things whenever there is ice cream involved. I, on the other hand, can convince them to do crazy things with my famous cheesecake.”

“I have other persuasion tools.”

I lowered my gaze to her mouth, keeping it there until she darted out the tip of her tongue, wetting her lips.

She flexed her back and wobbled backward a little. I brought a hand to her arm to stabilize her, afraid she’d land in the fountain otherwise. She looked up at me from under those long lashes, and I didn’t even register moving my hand from her arm to cup her face, resting my thumb just under her mouth. She parted her lips, releasing a shaky exhale, and I couldn’t stay away anymore. I closed the distance between us and spoke against her lips.

“I’m going to kiss you, Valentina.”

When she gave me a low moan as an answer, I crushed my mouth to hers. I slid my hand to the back of her head. When I sucked a little on her tongue, she groaned right into my mouth.

With my free hand, I drew her closer. I needed more than her lips. I wanted the warmth of her body, to feel her sweet curves. No, that was a mistake… because now that she was pressed against me, I became greedier still, wanting to feel her skin. I lost all sense of space and time, right until I realized she was whispering my name. Then I pulled her in my lap, moving my hands up her legs.

Her skin broke out in goose bumps. When I moved past her knees, her hips slid forward an inch. When I cupped her ass, my fingers didn’t encounter fabric, and for a split second, I thought she wasn’t wearing panties. At the thought of her bare, I nearly lost my mind. 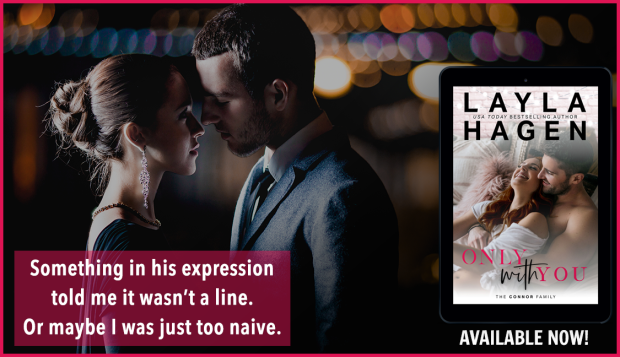 She fell in love with books when she was nine years old, and her love affair with stories continues even now, many years later.

She writes steamy and romantic stories and can’t wait to share them with the world.

She is represented by fabulous Louise Fury (The Bent Agency)