Hello my loves!!! Auden Dar reached out to me about reading her new book Prelude, but she did it in the BEST way! She truly follows my blog and read my ramblings, even called me out on being super lazy. For this, she is amazing!!! I was so excited to read this book, and I could not be more happy that I did! This is one of the top 10 books I’ve read this year, maybe even top 5!  Even better, this is Auden’s debut book!!!!! ♥

DISCLAIMER: PLEASE DON’T READ THIS IF YOU HAVEN’T READ THE BOOK! 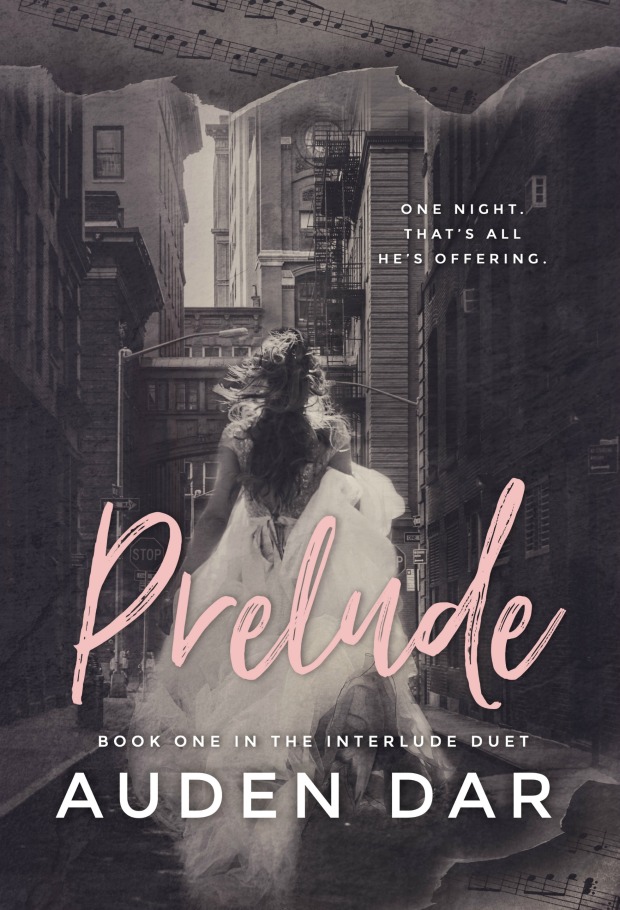 Prelude (Book One in the Interlude Duet)

I thought I had it all until he came back.

Julian Caine, my childhood friend, was a short, scrawny thirteen-year-old boy with thick glasses and a mouthful of braces the last time I saw him.

This is more than a fleeting attraction.  I’ve spent too many sleepless nights obsessing over him while my fiancé sleeps next to me.

Then Julian makes a proposal I can’t ignore.

If I say yes, will I finally have it all?  Or will it be a prelude to disaster?

Prelude is Book One in The Interlude Duet.  There is no cheating and due to graphic sexual content, it is intended for mature audiences only.

Amazing. Heart Breaking. Magnificent. Devastating. Beautiful. These are some of the best words to describe this book. This is by far one of my absolutely favorite reads this year. It tore at my sole in so many ways.

When we first met Lina in the beginning I felt so bad for her. I couldn’t begin to imagine how awful life with her fiancé would have to be for her to be thinking of someone else the way she was. That is where those words about the book start. There was so much wrong with her life, but I can totally understand staying in the same monotonous life. Then, we are introduced to Julian. Julian is so many things and I had so many feelings about him. He was the perfect distraction that Lina needed in her life, and the perfect wake up call.

I cannot wait to see where Auden takes us, because the end of this book left me wanting so much more.

Lina: From when we first got to experience the life of Lina I was instantly sad. I desperately hated her life for her and I was so sad that she was so blind to how mundane her life had become. She seemed so happy with Julian. With the way she was lusting after him, it was clear that she needed something else in her life. When she went to the party for Marcel it was as if she had been missing a big chunk of her life. There was a gaping hole that she didn’t even know she had. I was so sad to realize that these people hadn’t staged with heroine her life though. It seemed like she was missing so much.

When she finally left Andrew, I was beyond excited! I wanted to get up and scream, “finally.” The way that Julian helped to care of her after she left him was so adorable too! I was so excited that he started spending so much time with her.  When they finally paired up her her birthday, I was floored! I was really hoping she’d be more forward, but turns out she didn’t need to be.

Julian: This beautiful man is so aggravating! It was so clear how he felt about Lina, but he stood by and did nothing. He wished her away, but then some about, and had sex with another woman. I was so disappointed! He seemed like he was ready to be her knight. It wasn’t until he approached her at her home, that I finally had some hope! I was so happy that he helped her see the light and then how he helped her when she finally left Andrew. It made my heart so happy.

Then I got confused again. He seemed so offended when she didn’t want to move in with him, but he didn’t give her an explanation. He was so, so hurt, but why? And then the kiss, but followed by a cryptic text? When he went all out for her birthday and seduced her, I thought that maybe he turned a new leaf. Well… I guess not.

Their Relationship: Hm… their relationship. I really want to say, what relationship? After that ending I wanted to do nothing but punch Julian in his junk. The relationship they had was special. They had this crazy connection, even after having not seen each other so long. The way that they acted in the coffee shop and flirted, I knew it was going to be hot. But, I didn’t think I would be that disappointed in the lack of relationship they’d end up having. He wanted to be her friend, but he acted like he wanted to be so much more. I think they have such great potential, but there is something that he is hiding. I desperately want these two to be together, because they click so well! They are just too perfect to not be. Now, Auden didn’t want to be predictable, she wants us to think. Hard. We are really going to have to work for this, and I have so much respect for her. I expected nothing that happened and that’s the best gift.

My Thoughts: Amazing. Heart Breaking. Magnificent, Devastating. Beautiful. These are the best words that I could think of to describe how I felt throughout this whole book. From the moment we got to see Lin’s thoughts in the prologue, I knew I would be captivated and I wouldn’t be able to put the book down. I also knew that, in the prologue, she had to be special. Julian was so much more than I ever could have imagined!

The End: I knew going in that this was a duet and as my read percentage grew I was so venous to see how it ended. I never once thought that “one night” one lead to him leaving. He seemed like such a fraud. And what the hell does Marcel have to tell her? Is that why Julian left? Does Miss Pendleton know why he left? I have so many questions now!!!

I CANNOT WAIT FOR BOOK TWO!!!

One thought on “Book Chat: Prelude”